It is generally and broadly accepted that there are difficulties in discerning the origins of stone craftsmen (Lagadia, Epirus, Macedonia, etc.) in traditional architecture. The fact that those craftsmen have not put their personal “signature" in the vast majority of their works, combined with the interaction that existed between the various masonry schools are the main reasons behind the difficulty faced by systematic researchers in their efforts to classify a building based on the origin of the masons. These difficulties are magnified in the case of the typical folk house, where the requirements are limited due not only to the living difficulties faced by the populations to which we refer, but also due to the way the average man of that era regarded the functionality of his house. Nevertheless, the systematic study of the work of the Lagadia craftsmen qualifies us to acknowledge some special features in the Lagadia art of stone..

The people of Lagadia, having built a large number of churches, proved to be great church constructors. Based on the available evidence, it seems that they contributed to the development of the neo-octagonal type of church, which is mainly characterized by a sizeable dome that rests on eight points which include even the outer walls of the church. 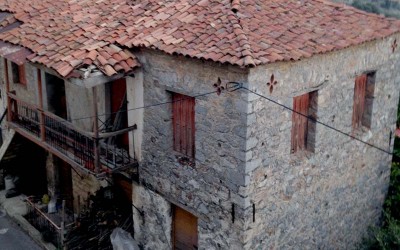 Although two-storey, three-storey or even four-storey houses are not uncommon, especially in Lagadia, the typical house found at the settlement is called “anokatogo makrinari” and the dimensions of the floor plan are approximately 12 X 6 meters.